SGTs Not Eligible for Promotions in SA ( Telugu/Hindi/Odiya) 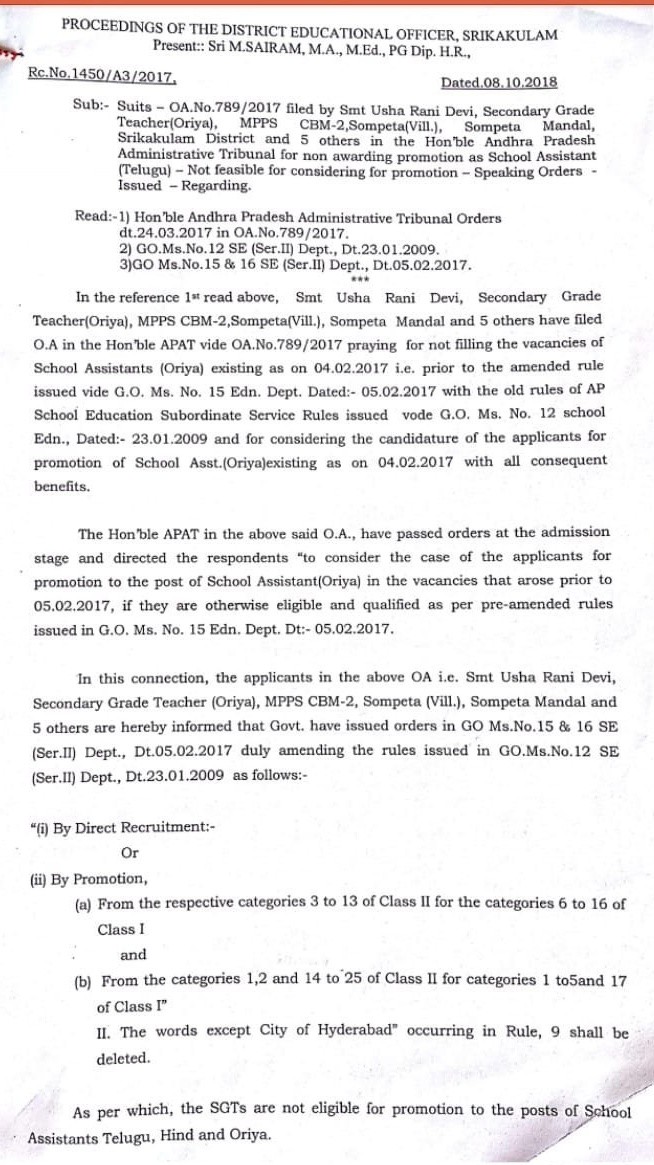 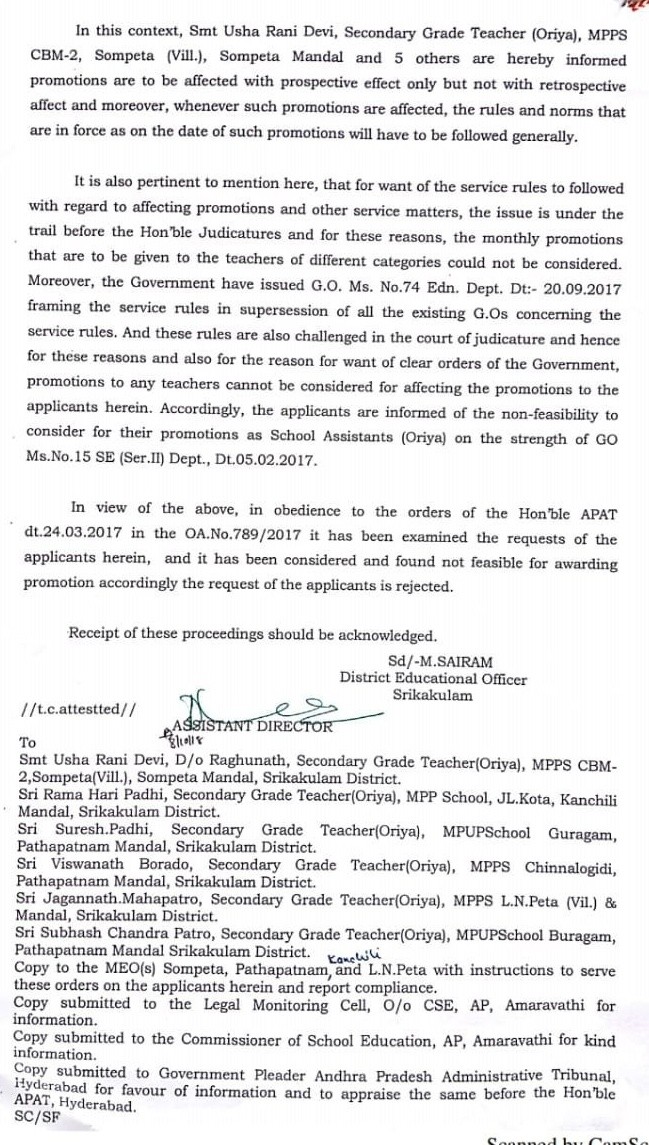 PROCEEDINGS OF THE DISTRICT EDUCATIONAL OFFICER. SRI ilLAM Present:: Sri M.SAIRAM, M.A., M.Ed., PG Dip. H.R. 12,Lku,,s, Pated.08.10,2018 Sub:- Suits – 0A.No.789/2017 filed by Smt Usha Rani Devi, Secondary Grade Teacher(Oriya), MPPS CBM-Z Sompeta(Vill.), Sompeta Mandril, Srikakulam District arid 5 others in the Honblc Andhra Pradesh Administrative Tribunal for non awarding promotion as School Assistant (Telugu) – Not feasible for considering for promotion – Speaking Orders – Issued – Regarding. Read:-1) Honble Andhra Pradesh Administrative Tribunal Orders dt.24.03.2017 in 0A.No.789/2017. 2) GO.Ms.No.12 SE (Seri!) Dept., Dt.23.01.2009. 3)G0 Ms.No.15 As 16 SE (Ser.11) Dept., DL05.02.2017. In the reference I. read above, Smt Usha Rani Devi, Second, Grade Teacher(Oriya), MPPS CHM-2, Sompeta(Vill.), Sompeta Mandril and 5 others have filed 0.A in the Honble APAT vide 0A.N0.789/2017 praying for not filling the vacancies of School Assistants (Oriya) existing as on 04.02.2017 i.e. prior to the amended rule issued vide G.O. Ms. No. 15 Edn. Dept. Dated:- 05.02.2017 with the old rules of AP School Education Subordinate Service Rules issued vode G.O. Ms. No. 12 school Edn., Dated:- 23.01.2009 and for considering the candidature of the applicants for promotion of School Asst.(Oriyalexisting as on 04.02.2017 with all consequent benefits.
The Honble APAT in the above said 0.A., have passed orders at the admission stage and directed the respondents ‘to consider the case of the applican. for promotion to the post of School Assistant(Oriya) M the vacancies that arose prior to 05.02.2017, if they are otherwise eligible and qualified as per pre-amended rules issued in G.O. Ms. No. 15 Edn. Dept. Dt:- 05.02.2017.
In this connection, the applicants in the above OA i.e. Smt Usha Rani Devi, Second, Grade Teacher (Oriya), MPPS CBM-2. Sompeta (Vill.), Sompeta Mandel and 5 others are hereby informed that Govt. have issued orders in GO Ms.No.15 & 16 SE (Ser.II) Dept., 55.05.02.2017 duly amending the rules issued in GO.Ms.No.12 SE (Ser.11) Dept., D1.23.01.2009 as follows:-
“(i) By Direct Recruitment:- Or (ii) By Proraotion, (a) From the respective categories 3 to 13 of Class II for the categories 6 to 16 of Class 1 and (b) From the categories 1,2 and 14 to 25 of Class 11 for categories 1 to 5 and 17 of Class I° 11. The words except City of Hyderabad occurring in Rule, 9 shall be deleted.
As per which, the SOTs arc not eligible for promotion to the posts of W1, bol • Assistants Telugu, Hind and Oriya.
In this context, Smt Usha Rani D., Second, Grade Teacher (Oriya), MPPS CBM-2, Sompeta (Vill.), Sompeta Mandel and 5 others are hereby informed promotions are to be affected with prospective effect only but not with retrospective affect and moreover, whenever such promotions are affected, the rules and norms that arc in force as on the date of such promotions will have to be followed generally.
It is also pertinent to mention here, that for want of the service rules to followed with regard to affecting promotions and other service matters, the issue is under the trail before the Honble Judicatures and for these reasons, the monthly promotions that are to be given to the teachers of different categories could not be considered. Moreover, the Govemment have issued G.O. Ms. No.74 Edn. Dept. Di:- 20.09.2017 framing the service rules in supersession of all the existing G.Os concerning the service rules. And these rules are also challenged in the court of judicature and hence for these reasons and also for the rthson for want of clear orders of the Government, promotions to any teachers cannot be considered for affecang the promotions to the applicants herein. Accordthgly, the applicants are informed of the non-feasibility to consider for their promotions as School Assistants (Oriya) on the strength of GO Ms.No.15 SE (Serif) Dept., Dt.05.02.2017.
In view of the above, in obedience to the orders of the Honble APAT dt.24.03.20 17 in the 0A.No.789/2017 it has been examined the requests of the applicants herein, and it has been considered and found not feasible for awarding promotion acthrdingly the request of the applicants is rejected.
Receipt of these proceedings should be acknowledged. Sd/-M.SAIRAM District Educational Officer Srikakulam
//t.c.attestted// To v Smt Usha Rani Devi, D/o Raghunath, Secondary Grade Teacher(Oriya), MPPS CBM-2,Sompeta(Vill.), Sompeta Mandal, Srikakulam District. Sri Rama Hari Padhi, Second, Grade Tthcher(Oriya), MPP Sthool, JL.Kota, Kanchili • Mandal, Srikakulam District. Sri Suresh.Padhi, Second, Grade TeacheriOriya), MPUPSchool Guragam, Pathapatnam Mandal, Srikakulam District. Sri Viswanath Borado, Second, Grade Teather(Oriya), MPPS Chinnalogidi, Pathapatnam Mandal, Srikakulam District. Sri Jagannath.Mahapatro, Second, Grade Teaches(Oriya), MPPS L.N.Peta (Vii.) & Mandal, S.alcularn District. Sri Subhash Chandra Patro, Secondary Grade Teacher(Oriya), MPUPSchool Buragam, Pathapatnam Mandel Srikakulam District. Copy to the ME0(s) Sompeta, Pathapatnam, and L.N.Peta with instructions to serve these orders on the applicants herein and report compliance. Copy submitted to the Legal Monitoring Ce)l, 0/o CSE, AP, Amaravathi for information. Copy submitted to the Commissioner of School Education, AP, Amaravathi for kind information. FoPY submitted to Government Pleader Andhra Pradesh Administrative Tribunal, aiyderabad for favour of information and to appraise the same before the Honblc APAT, Hyderabad. SC/SF