A.P Reorganization Act,2014 Transfer of certain Mandals to the residual State of Andhra Pradesh from Khammam District of Telangana State-Filling of vacancies-Permission-Orders- Issued. 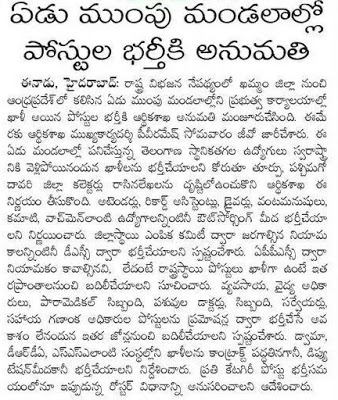 AP Government Permission to the District Collectors of East Godavari District and West Godavari District have informed that as per the orders of the Government, the employees of Telangana local area working in the seven merged mandals transferred from Khammam district were relieved to report before the Telangana Government resultingin a number of vacancies, in addition to the existing vacant posts. They have submitted a list of vacancies in the merged Mandals (which have been annexed to this order as Annexure-I &Annexure-II) and requested to accord permission to fillup the vacant posts to strengthen the delivery of public services in these seven mandals.
AP Government after careful examination of the matter,hereby accord permission to fill the vacant posts in the merged Mandals of East Godavari and West Godavari Districts in the following Department Wise Vacancies shown. 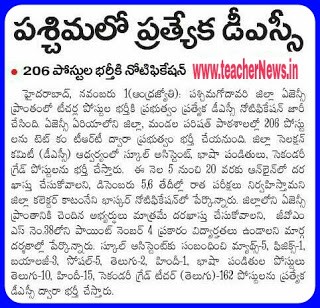 Vacant posts of Office Subordinates,Record Assistants,Drivers of roadworthy vehicles, Cook, Kamati, Watchperson through outsourcing or contract basis,duly following the standing instructions of the government in this regard duly adhering to the principles of merit, rule of reservation, etc.
The DSC level posts are permitted to be filled by the District Selection Committee following the existing procedure,with special attention to reservation to local tribals, wherever applicable.
Posts that are to be filled by direct recruitment by APPSC or State level body are permitted to be filled up by redeployment.
For Posts like Agriculture Officer, Medical Officer, Paramedical staff, Veterinary Asst. Surgeon and Veterinary Technical Staff,Deputy Surveyor of Survey and Land Records department, Assistant Statistical Officer of Bureau of Economics and Statistics,there is no scope of filling the posts by promotion,the posts shall be filled up by redeployment from the other parts of the Zone.
Posts that belong to the Societies like DWMA,DRDA,SSAshall be filled by contract/deputation/recruitment by respective society.
The existing roster points are to be adopted for filling up the vacancies of each category of posts.