The Chief Commissioner of Land Administration, Telangana State, is requested to communicate the above revised ceiling limits to all the functionaries in the Revenue Department like VROs / RIs / Dy. Tahasildars / Tahasildars / Superintendents / RDOs / District Collectors concerned for information and necessary action.
The Department of Backward Classes Welfare was part of the erstwhile Social Welfare Department, presently renamed as Scheduled Castes Development Department, till 1992. From 1992 onwards to till the formation of the new 29th State of Telangana on 2nd June 2014, different Annual Family Income limits were prescribed by the erstwhile Government of Andhra Pradesh in the references first to sixth read above.
Government after careful examination of the issue, hereby order uniform enhancement / revision of annual family income limit for various schemes / programmes under BC Welfare Department, both for the Rural and Urban Areas, as detailed below: 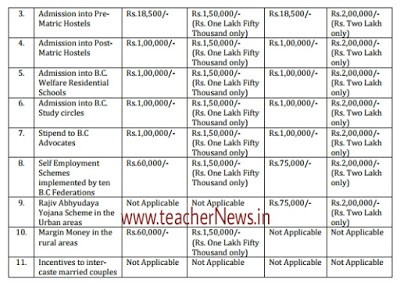 It is felt necessary to revise the aforesaid annual family income limit in tune with the present day needs and to make income criteria uniform for all the welfare schemes and programmes in the State in respect of Backward Classes Welfare Department. It is also observed that prescribing different income ceilings limit for different schemes and programmes creates lot of confusion both from among the members belonging to the Groups A, B, C, D and E of the Backward Classes / communities but also for field level functionaries competent to issue such certificates.

(adsbygoogle = window.adsbygoogle || []).push({});
These orders shall come into force with immediate effect from the Financial Year 2015-16 onwards.
This order issues with the concurrence of Finance (EBS.III) Dept., vide their UO No.13174/322/A2/EBS.III/2015, dated 19/10/2015.
Details of Annual Family Income Limit for various Schemes / Programmes under BC Welfare Department to the members belonging to Backward Classes / Communities