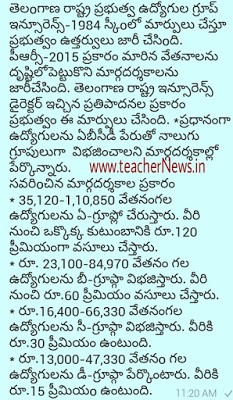 The above revision of Groups was proposed to effective from February, 2015. The subscription as per the revised groups shall be
recoverable compulsorily each month.

6. There is however no change in the insurance cover i.e.
the amount of insurance cover shall be Rs.15,000/- for each Unit of
subscription.
7. To ensure proper implementation of the Scheme, all the
Heads of Department are requested to follow the instructions given below
scrupulously:
1. The date of assumption of the charge of a higher post and
the date of orders of the reversion to a lower post shall be taken as a criteria
for determining the change of Group.
2. In case of appointment to Automatic Advancement Scale,
the date of orders shall be taken as a criteria for change of higher group.
3. The Drawing and Disbursing Officer shall be held
responsible for recovery of correct subscription in respect of the group to
which the employee belongs and in case of failure, the difference due shall be recovered
from the Drawing and Disbursing Officer concerned.
4. Directorate of Insurance, Telangana, Hyderabad, through
his subordinate officers shall conduct a regular audit of all claims under Group
Insurance Scheme and send a report to the Head of Departments concerned for any
lapse.
5. The Head of Department concerned shall take action
against the erring officials who are responsible for the excess/less recoveries
wherever they are detected.
6. If an employee’s subscription is not recovered during his
service period, the total subscription along with interest shall be recovered from
the payments admissible to him.
7. The Head of Departments shall take prompt action for
recording the necessary subscription entries in the Service Registers of the
Employee under proper attestation every year i.e. April to March.
8. Group Insurance Scheme payment sanction orders including calculation
slip should be sent to the Directorate of Insurance for verification as per
orders issued in G.O.Ms.No.910, Finance (Admn-II)
Department, dated.28.10.2002.
9. The Director of Treasuries and Accounts, Pay &
Accounts Officer and Director of Works and Accounts shall take necessary action
to arrange to send the details of Receipts and Payments Group – Wise in  Annexure B and ED to the Director of
Insurance, Hyderabad every month without fail.
10. In so far as the persons for whom the claims arose during
the period from June, 2014 to September, 2015, the settlement as per the old
slab rates and there shall be no recovery from such persons.
8. All the Head of Departments are requested to issue
suitable instructions to their subordinate Officers, that the revision of groups
under the Telangana State Employees Group Insurance Scheme shall be implemented
properly.