Telangana Rc.No. Kalautsav/RMSA/TS/2015  Dt. 30-09-2015 TS RMSA implementation of Kala Utsav program as per the orders of the goi to promote arts in education by nurturing and showcasing the artistic talent of school students at the Secondary stage in the country 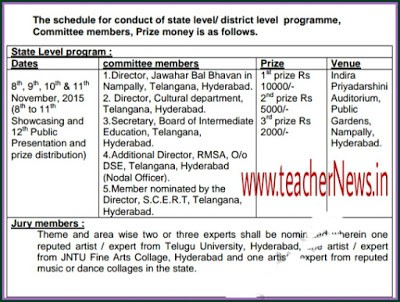 The attention of all the District Educational Officers in the state invited to the references read above and informed that, the GoI, MHRD, New Delhi has intimated that the GoI has launched the program called “Kala Utsav” the aim of the program is to promote arts in education by nurturing and showcasing the artistic talent of school students at the Secondary stage in the country and the GoI had also informed that Kala Utsav would be celebrated each year demonstrating every State’s culture and tradition which would be theme based as follows and there shall be only one entry from each area of art from each State for the Kala Utsav at National Level under following themes, areas and eligibility :

Areas of Art for Kala Utsav:

Teams of students from classes 9th, 10th, 11th and 12th of any Govt and Aided schools / collages. Visual Arts Visual Arts State shall select the best teams for participating at the National Level and GoI had suggested as follows :

District Level : This is first level of Kala Utsav, where all schools can send their entries.(If appropriate and convenient, the State may opt to have Kala Utsav at block or tehsil level).

State Level : Selected teams from District level will participating at this level.
National Level : This is the final and culminating level of Kala Utsav where best of the State/ UT entries will showcase their talent e- Proforma for submitting entries:

Kala Utsav at the National Level: