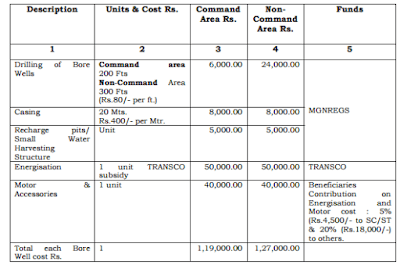 I The Mission:-
(a) Government have decided to go in for bore wells initially in the seven districts of the state i.e., (4 Rayalaseema and 3 North Costal districts) by optimally utilizing the available ground water resources and recharge levels.
(b) Energising the existing 10,000 borewells of the individuals already drilled in the command area of seven backward districts.
(c) Identified about 29,941 additional bore wells in command areas and 20,668 bore wells in non-command areas. In the non-command areas bore wells basically selected in high rain fall in three north costal districts keeping in view the fact that availability of water is relatively high for possible recharge.

II. Objectives of the bore wells project
Conjunctive use of surface and ground water:

(i) The small and marginal farmers (up to 5 acres land) those who are having the lands in Command areas and high rainfall areas of north coastal districts in Non command area with the Groundwater potential and without any existing bore well irrigation are eligible.
(ii) Only one source (Bore well/ Tube well/ Filter point well) is permitted in 5 acres area and the land shall be contiguous block.
(iii) The area shall be in safe category Groundwater basin with the utilization less than 70% of the annual replenishable groundwater in the basin.
(iv) Tail end areas/ areas irrigated once in command areas shall be prioritized
(v) After drilling, the borewell should yield 4500 Litres per hour which is a successful borewell for both command and non-command areas.
(vi) SC and ST farmers are to be given priority in the programme.
(vii) Eligible beneficiaries list is to be approved in the gramasabhas in the respective villages

(i) After receiving the sanction, the beneficiary will construct the Bore Well/ Tube Well/ Filter Point well at the recommended location duly informing to the concerned authority for inspection and yield test.
(ii) After drilling of the Bore well, the beneficiary has to submit the Bore well completion report to the PO/MPDO of respective Mandals with photograph.