In the GO first read above, orders were issued revising the pay scales of the State Government employees in the light of the recommendations of the Tenth Pay Revision Commission. In the reference second read above, it has been brought to the notice that the recommendations of the Tenth Pay Revision Commission on the pay scales of Superintending Engineers and Assistant Engineers of RWS&S Department have not been carried out properly and thereby these categories get lesser pay scales than the pay scales of similar categories in other Engineering Departments and it requested to rectify the discrepancy.


2. The matter has been examined and it is noticed that the Tenth Pay Revision Commission in Volume-II of its report recommended that the pay scales of various categories of Engineers working under I&CAD Dept., will equally apply to similar categories of Engineers working in Irrigation (Projects) Dept., R&B Dept., Municipal and P.H. Engineering, Panchayat Raj Engineering, RWS&S Dept. and T.W. Engineering Dept. But, these recommendations have not been carried out properly in Volume III, which is a typographical error.


3. Accordingly, Government hereby orders revision of the pay scales of Superintending Engineers and Assistant Engineers of RWS&S Department as indicated below and the following amendment is issued to the G.O. first read above 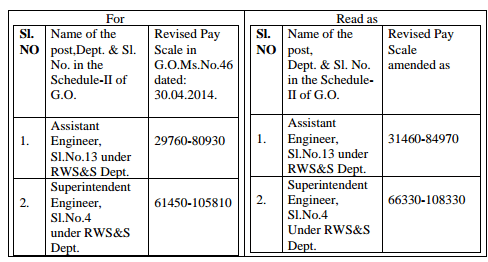