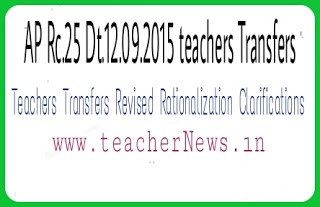 Andra Pradesh School Education commissioner inform that all District Educational Officers in the Sate are informed that during the Video Conference . Hyderabad held on 11.09.2015 and 12.09.2015  certain clarifications were sought by the District Educational Officers. After examination of the issues raised and discussions held, the following Rationalization clarifications and Transfer’s clarification are issued with regard to teachers
Clarification Sought : Clarification Issued
1.Enrolment data : For the purpose of rationalization the Aadhaar Seeded child info data i.e. U.I.D. or E.I.D up to April, 2015 should be taken into consideration.
2. Enrolment criteria :

8.Utilization of Surplus teachers :
After adjusting the identified surplus posts / person as per requirements, the remaining posts / persons may be identified and informed to Commissioner of School Education. Accordingly further instructions / Guidelines will be issued separately.
9 Criteria for transfer (Long standing) :  The number of years of service completed in a particular school in the particular cadre should be considered.
10 Teacher attendance in the present cadre {Rule 6 (c)(a)} of the G.O. :
Teacher attendance includes actual attendance in the school and Other Duty (O.D.) under proper orders & certification during the 220 working days.
11 Performance of A and A+ grade obtained by students in class III, V & VIII in a school in the Annual Assessment Survey for that year AAS – 2015 {Rule 6 B (c)(a)} of the G.O. The words with respect to grades may be read
“If 70% to 79.99% students got B+ and above”
12 School Average performance in SSC Exam {Rule 6 (B) (d)} of G.O.