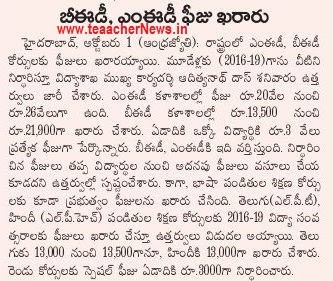 1. In the G.O. second read above, orders were issued notifying the fee and special fee structure for the course of B.Ed. in respect of certain Private Un-aided Minority/ Non-Minority colleges in the State of Andhra Pradesh for the academic years 2013 – 14 to 2015 – 16.

3. Government after careful examination have decided to accept the resolutions/ recommendations of the Admission and Fee Regulatory Committee, the following notification will be published in the Extra Ordinary issue of the Andhra Pradesh Gazettee, dated 01.10.2016.

In exercise of the powers conferred by sections 3 and 15 of the Andhra Pradesh Educational Institutions (Regulation of Admission and Prohibition of Capitation Fee) Act, 1983 (AP Act 5 of 1983) and the Andhra Pradesh Colleges of Education (Regulation of Admissions into B.Ed. course through Common Entrance Test) Rules, 2006 issued in G.O. Ms. No.92, Education (SE-Trg.I) Department, dated 16.11.2006 and in pursuance of the resolution of the Committee ( Admission and Fee Regulatory Committee) in their meeting held on for the course of B.Ed in Private Un aided Colleges (Minority and Non-Minority) in the State of Andhra Pradesh for the academic years 2016 – 17 to 2018 – 19:

(i) The Tuition Fee is fixed per annum per each student are shown against the college name for 220 B.Ed colleges listed in Annexure – I. (ii) Special fee is of Rs.3000/- (Three thousand Rupees only) per annum for each student as specified below for all the Private unaided (Minority and Non-Minority) B.Ed Colleges in the State for the years 2016 – 17 to 2018 – 19.

The following directions to the concerned Private Un-aided (Minority and Non-Minority) B.Ed Colleges:

(i) The Institutions shall not charge any capitation fee or any amount un-authorizedly or illegality under any other head or guise (e.g. donation etc.), either directly or indirectly, other than the fee fixed by the Committee, as collection of any such unauthorized amounts would amount to charging of Capitation Fee, and that the surplus (profit) that is generated from the collection of the Fee must be for the benefit of the Institution, and cannot diverted for other purposes or for personal gain.

(ii) The Institutions are informed that fixation of the Fee Structure by the Committee will not by itself enable or permit the managements to run the relevant courses in their institutions, if they are otherwise not duly recognized and permitted by the Government/ NCTE/ concerned University / Government Department at any relevant time.

(iii) The enhanced fee now being in respect of institutions whose proposals have been evaluated based on the details/ figures furnished by them to A.F.R.C. is subject to furnish physical verification. If it is found that the data given by the institution is not correct, the Fee shall be subject to revision at a later date and this fact shall be informed to the University or Competent Authority concerned for taking necessary action in accordance with law.