1.The Vidya Volunteers will be engaged from 21st September, 2015 to 20th April, 2016 for the schools as approved by the Director of School Education. They are purely temporary and can be terminated before  20th  April,2016 also  based on justifiable grounds by the School  Management Committee (SMC).

2.The Vidya Volunteers shall be engaged to ensure regular functioning of the schools .
Candidates should have completed 18 years of age and upper age limit is 44 years as on 1st July, 2015.  (5) years relaxation is given in case of SC / ST/BCs and (10) years for  Physical Challenged persons. 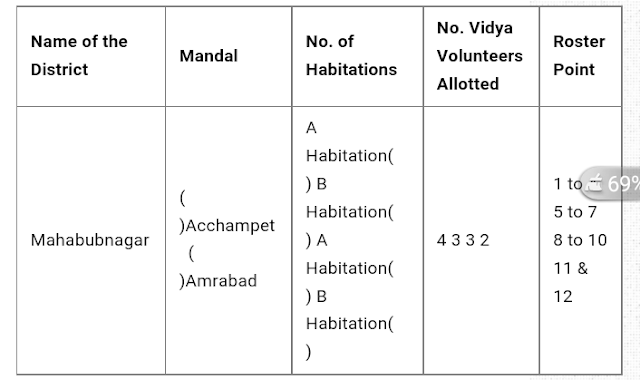 The following are the educational qualifications required  for engaging Vidya Volunteers:

Primary Schools(Classes I to V):

Intermediate with  D.Ed.  In case of non availability of candidates with D.Ed, B.Ed candidates may be considered.

The following weightage shall be given to the eligible Candidates who have applied for the post of Vidya Volunteer :

If weightages of  two or more Candidates are equal, qualification and then age shall be taken into consideration for arriving at the order of Candidates in the merit list.

The DEO shall place the merit list of the Candidates so prepared before the District Level Committee comprising – District Collector;  Project Officer, ITDA/Addl. Joint Collector/Chief Executive Officer, ZP and District Educational Officer as the Member Secretary. The District Collector  shall personally head this Committee and oversee the entire process of engaging these Vidya Volunteers. After finalisation of the lists of Vidya Volunteers by the District Level Committee, the same shall be communicated to the Mandal Educational Officers for onward communication to the School Management Committees for engaging the Vidya Volunteers in the school.  Any grievance on the above order lies in Appeal to the Director of School Education within a week from the date of publication of the lists by the SMCs.

The Cluster Head Master concerned shall be given the responsibility to coordinate with the SMCs concerned in engaging Vidya Volunteers. SMCs will enter into an Agreement with the Vidya Volunteer in the prescribed format.

The Director of School Education, Telangana, Hyderabad shall draw a detailed Schedule and communicate the same to the competent authorities to engage the Vidya Volunteers.