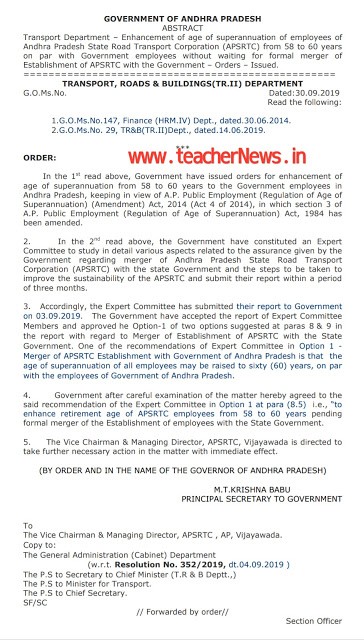 2. In the 2nd read above, the Government have constituted an Expert
Committee to study in detail various aspects related to the assurance given by the
Government regarding merger of Andhra Pradesh State Road Transport
Corporation (APSRTC) with the state Government and the steps to be taken to
improve the sustainability of the APSRTC and submit their report within a period of three months.

4. Government after careful examination of the matter hereby agreed to the
said recommendation of the Expert Committee in Option 1 at para (8.5) i.e., “to
enhance retirement age of APSRTC employees from 58 to 60 years pending
formal merger of the Establishment of employees with the State Government.

5. The Vice Chairman & Managing Director, APSRTC, Vijayawada is directed to take further necessary action in the matter with immediate effect.