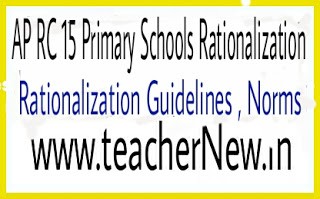 All the Regional Joint Directors of School Education and the District Educational Officers in the state are informed that, instructions were issued in the reference 1st read above to take up preliminary exercise of Resource Redistribution – Rationalization.After constituting a Mandal Level Committee, duly verifying the physical status, availability of teachers and enrolment of students in each school and in each Gram Panchayat/ Municipality the feasibility for Positive Consolidation of Primary Schools and identification of Model Primary Schools exercise was to be done.. The District Educational Officers furnished the details of the schools for Establishment of Adarsha Pradhamika Paatasala (Model Primary Schools) and the schools for Positive Consolidation. The same was forwarded to the Government.

In the reference 2nd read above the Government issued orders for Establishment of Adarsha Pradhamika Paatasala and Positive Consolidation of Schools and the same was communicated in the reference 3rd read above.

In the reference 4th cited instructions were issued to all the Regional Joint Directors of School Education and District Educational Officers to once again re-verify the earlier exercise undertaken and submit the proposals for modification if required any in the list by 10.08.2015 with proper justification. Some of the District Educational Officers have furnished the revised list after the due date, i.e. the entire modified list once again without mentioning which are the schools / Model Primary Schools to be deleted from the lists communicated in the G.O. and which are the new schools / Model Primary Schols to be added to the list.

This should be treated as MOST URGENT.