SCERT Telangan has Prepared 5-day Orientation Programme for Headmasters and SCERT is planned planned to conduct in all the Districts at Divisional Level in two spells on academic aspects and school leadership. Proceedings Of The Director Of School Education, Telangana.Drafting the State Level Observers to the Districts – Orders issued – Reg.
TS  Rc. No. 419/D/C&T/TSCERT/2015, Dated: 18.11.2015, Subject: SCERT, Telangana, Hyderabad
In this connection, State Level Observers are drafted to the Districts to observer the training programmes. The observers attend the planning meeting also on 19th November, 2015 followed by trainings. Following are the Observers drafted to the Districts. 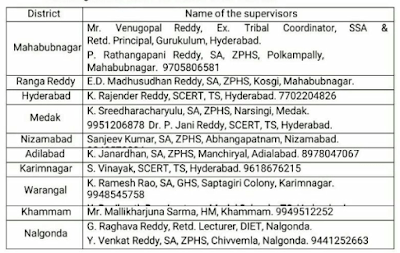 Orientation to the Headmasters on school academic matters and school leadership in two spells .