Home Uncategorized GO.342 Deputation by SC ST Eployees for Higher Education with in the...

GO.342 Deputation by Scheduled Cast ( SC ) and Scheduled Tribe ( ST )  employees for Higher Education with in the country on full pay 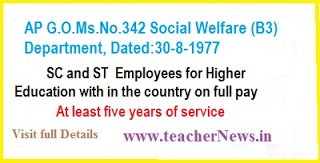 Confirmed State Harijan Conference – Recommendation by the conference for deputation by Scheduled Cast and Scheduled Tribe employees for Higher Education with in the country on full pay.

(adsbygoogle = window.adsbygoogle || []).push({});
It was recommended at the State Harijan Conference held in April, 76 that employed Scheduled Caste persons should be deputed for Higher Education within the country on full pay basis.


1. The matter had been carefully Government with reference to certain categories of employment in Government in cases acquiring of higher qualifications in pre -requisite further their career.
2. Government have accordingly, decided that in cases where the acquiring of higher educational qualifications  in pre-requisite for further promotion according to the rules, the scheduled caste and scheduled tribe employees  should be deputed for higher studies within the country with full pay and allowances.

3. This facility will however, be subject to the following conditions: