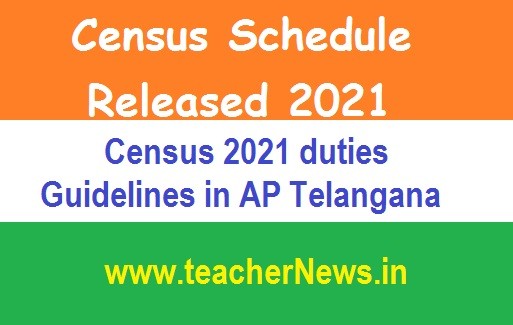 The following Notification of Government of India shall be republished in the extra-ordinary issue of Andhra Pradesh Gazette :

MINISTRY OF HOME AFFAIRS (OFFICE OF THE REGISTRAR GENERAL, CITIZEN REGISTRATION, INDIA), New Delhi, the 31st July, 2019. S.O.2753 (E)- In pursuance of sub-rule(4) of rule 3 of the Citizenship (Registration of Citizens and Issue of National Identity Cards) Rules 2003, the Central Government hereby decides to prepare and update the Population Register and the field work for house to house enumeration throughout the country except Assam for collection of information relating to all persons who are usually residing within the jurisdiction of Local Registrar shall be undertaken between the 1st day of April, 2020 to 30th September, 2020.


(adsbygoogle = window.adsbygoogle || []).push({});
(BY ORDER AND IN THE NAME OF THE GOVERNOR OF ANDHRA PRADESH)
R. P. SISODIA,
PRINCIPAL SECRETARY TO GOVERNMENT (GPM & AR) (FAC).

The Commissioner of Printing, Stationery & Stores Purchases (Ptg.Wing) Vijayawada.(for publication in an extra-ordinary issue of A.P. Gazette and request to furnish 25 copies to Government).
The Joint Director, Directorate of Census Operations, Kendriya Sadan, Sultan Bazar, Koti, Hyderabad-500 095.
All Departments of Secretariat.
All Heads of Departments.
All District Collectors.