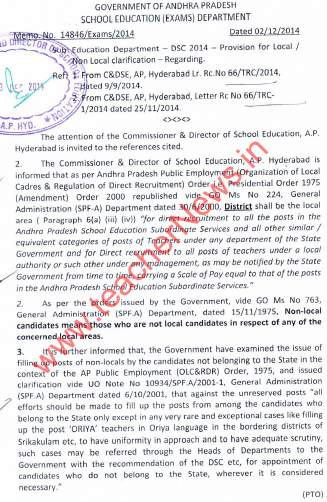 
2. As per the orders issued by the Government, vide GO Ms No 763, General Administration (SPF A) Department, dated 15/11/1975. Non-local candidates means those who are not local candidates in respect of any of the concerned local areas

3. It is further informed that, the Government have examined the issue of filling up posts of non-locals by the candidates not belonging to the State in the context of the AP Public Employment (OLC&RDR) Order, 1975, and issued clarification vide UO Note No 10934/SPF.A/2001-1, General Administration SPF.A) Department dated 6/10/2001, that against the unreserved posts “all

efforts should be made to fill up the posts from among the candidates who belong to the State only except in any very rare and exceptional cases like filling up the post ‘ORIYA teachers in Oriya language in the bordering districts of Srikakulam etc, to have uniformity in approach and to have adequate scrutiny, such cases may be referred through the Heads of Departments to the Government with the recommendation of the DSC etc, for appointment of candidates who do not belong to the State, wherever it is considered necessary.