VRAs during the Samaikhyandhra Agitation be treated as duty, and the honorarium be paid to them, @ 3000 honorarium +500 D.A., per month

AP Village Administration – Village Revenue Assistants- Certain request for Sanction of honorarium to the VRAs who participated during Samaikyandhra Agitation for the Strike period treating the period as on duty- considered – Orders Issued. 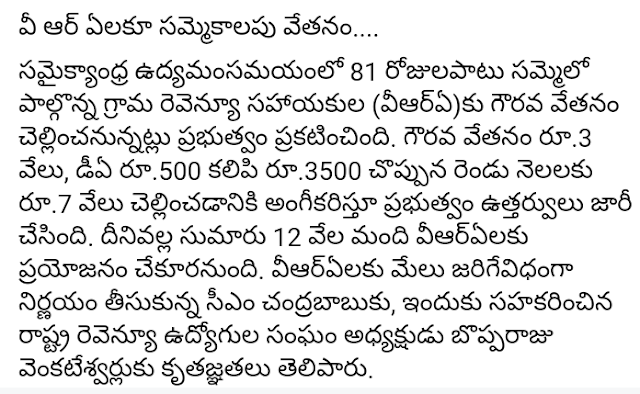 (adsbygoogle = window.adsbygoogle || []).push({});
&&&
ORDER:
In the reference 1st read above, the APNGOs Association has informed that Government have issued orders in G.O.Ms.No. 33, Finance (HRM.IV-FR) Department, Dt. 31-03-2015 regularising the general strike participated by Government employees during the Samaikyandhra Agitation for a period of 81 days from 13-08-2013 to 17-10-2013 and from 06-02-2014 to 20-02-2014 as Special Casual Leave.
2. The Association has further stated that the Village Revenue Assistants in the State of Andhra Pradesh have also participated in the general strike of 81 days in two spells on par with the regular Government employees. The VRAs are being paid honorarium and some of them have not drawn their honorarium in view of participation in the strike in connection with the Samaikyandhra Agitation, and thereby requested to issue necessary orders to sanction the honorarium for VRAs who have not drawn their honorarium for the above period as they have no facility to grant Earned Leave or such. The absence period has to be treated as duty period and the honorarium be paid for the strike period as they are lowest paid employees in the system duly extending the benefit given in G.O.Ms.No.33 dt. 31-03-2015.
3. The Government after careful examination of the matter hereby order that the period of 81 days or the actual period participated by the VRAs during the Samaikhyandhra Agitation be treated as duty, and the honorarium be paid to them, @ 3000 honorarium +500 D.A., per month.
4. The Chief Commissioner of Land Administration, Andhra Pradesh, shall take further necessary action accordingly in the matter.
5. This order issues with the concurrence of Fin (H.RIV) Department vide their U.O.No. 32815/908/H.R.IV/2015, Dt. 08-12-2015.
(BY ORDER AND IN THE NAME OF THE GOVERNOR OF ANDHRA PRADESH)
J.C.SHARMA PRINCIPAL SECRETARY TO GOVERNMENT
To
The Chief Commissioner of Land Administration, Andhra Pradesh, Hyderabad.
All The District Collectors, through the CCLA., A.P. Hyderabad..
Copy to
The P.S to Prl. Secy to C.M.,
The P.S. To Dy. C.M. (Rev).
The P.S to M(Fin) P.S to C.S., P.S to Prl Secy. Rev. The Finance (HR.IV) Department,
All The D.T.Os of the State / P.A.O. A.P. Hyderabad.
The President, A.P. Revenue (Ser) Association.
The President, A.P. VRAs Association.
SF/SC
//FORWARDED::BY ORDER//
SECTION OFFICER