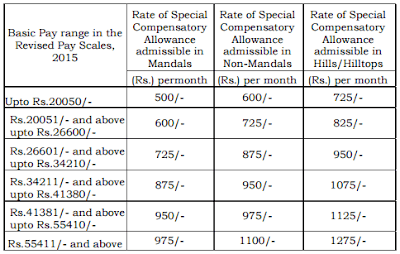 (c) The Tenth Pay Revision Commission also recommended to extend the payment of Special Compensatory Allowance to all the employees working in the Villages/Hamlets in Non-mandals, Mandal Headquarters and Villages/Hamlets located in Hills/Hilltops covered by the Government orders second and third read above, without restricting it only to those employees who approached courts.
5. The Government after careful examination of the report, decided to implement the recommendations of the Tenth Pay Revision Commission on Special Compensatory Allowance and hereby order that the Special Compensatory Allowance shall be payable to all the employees working in Mandal Headquarters, to all the employees working in Non-Mandals [Villages/Hamlets other than Mandal Headquarters] and to all the employees working in Villages/Hamlets located in Hills/Hilltops of scheduled areas, in a slab system on the basic pay drawn in Revised Pay Scales, 2015 at the following rates per month.
6. The Special Compensatory Allowance sanctioned in para ‘5’ above, is not admissible to the Doctors who are eligible for “Tribal Allowance” as per G.O.Ms.No.411, HM & FW (A2) Department, dt.5.11.2001 and based on the Tenth Pay Revision Commission recommendations, separate orders will be issued by HM & FW Department in this regard.
7. The above allowance shall be admissible to those who are drawing pay in the Revised Pay Scales of 2015, but not in any other pay scales.
8. The condition of applicability of the revised rates shall be on the same terms and conditions laid down by the Government in the earlier orders while continuing the Special Compensatory Allowance upto Revised Pay Scales, 2015, subject to classification of the Scheduled areas as mentioned in the G.Os., 1st to 5thread above.
9. The Special Compensatory Allowance sanctioned above shall be admissible to all Government Employees and employees of Local bodies working in the offices situated in the Scheduled areas in the State as per G.Os., 1st to 5th read above and those who are already drawing the same.
10. These orders shall come into force with effect from 01.12.2015.
11. Necessary amendments to the Manual of Special Pays and Allowances will be issued separately.
12. The G.O. is available on Internet and can be accessed at the addresses
http://www.goir.ap.gov.in andhttp://www.apfinance.gov.in