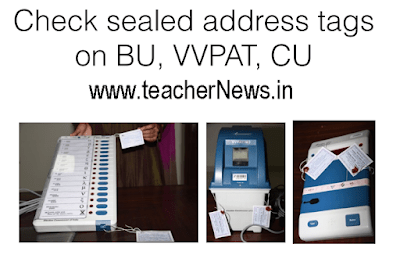 How to Seal EVM and VVPAT after Mock Poll Watch Here

Election Presiding Officers and Asst Presiding Officers have to Conduct Mock Poll before commencement of Polling on the Polling Day after conducting Mock Poll Officials have to seal the Electronic Voting Machine EVM and VVPAT Properly. Most of the Election Staff have doubt on Sealing EVM with Green Seal Special Tag Strip Seal and Step by Step Process to be sealed is here. And after the Election How to Pack the Forms Election Material in different category of Packets here are the details.

How to Conduct Assembly Elections with Video Download New

Election Process Points in the form of Question and Answers

During Election Time POs and APOs have to perform many duties and have many responsibilities from the Day Before Election to the end of election duty on the next day evening. It is natural that there arises many questions related to the duties and responsibilities that they have to perform during those 2 days. It is very important to have a good knowledge on the process of Election Duties performed on that respective day. For that the POs and APOs have to go through the module given at Election Duty Training Programme.